This article has been specifically written to give you the knowledge to get out of Facebook group chats in a matter of a few taps. This process works for all of the major platforms and any device that is capable of running Messenger. 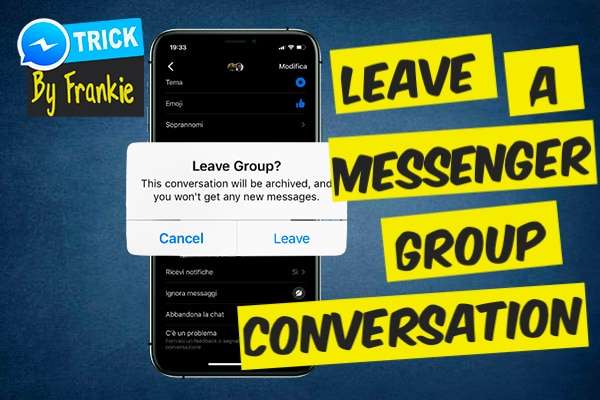 Hey, it’s Frankie here again and today I want to tell you another technology trick to leave a Facebook messenger group conversation.

You likely already know how annoying it is to get invited into a group message that you wanted no part of, or no longer wish to be privy to. Being in a conversation like this, you are subjected to all the messages written to the group and responses from these messages. It’s tiresome. When you no longer want to be a part of this, you are looking for the way to get yourself out of the conversation quickly.

Sure, you can let the thread die out on its own or simply mute it, but you don’t have to go through this trouble. Messenger has provided a way out, literally.

So, without further ado, here is how you get rid of the conversation (along with every annoying notification that comes along with it).

The process is a little different between Android and iPhone, so we will examine both of them separately.

It really is that simple to get yourself out of an annoying group messaging conversation on Facebook Messenger. Bear in mind, once you leave a group, other members are notified that you have left.

Bonus Trick: How to leave a Facebook Messenger group conversation without anyone noticing

There is no way to leave the group without Facebook putting a line in the conversation stating you have left.

But, almost as good, is to mute the group. You can select mute “Until I unmute” and you might as well have left the group since you won’t get notifications and, if anyone mentions you or talks directly to you, they will see you haven’t seen the message as long as you stay out of the thread completely.

While the process might seem straightforward, it is possible that you might struggle with the steps. If you have any trouble or further questions, be sure to leave a comment below so I can help you out.