With this guide you will learn how to block someone on Facebook Messenger. Not only that, I will also show you how to unlock a blocked user on Messenger and answer some of the most frequently asked questions about this topic. 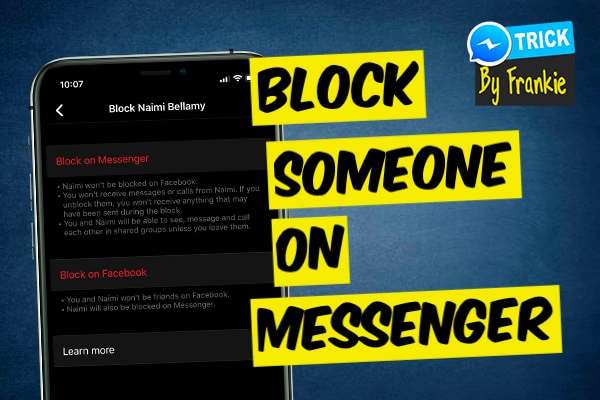 Hi I’m Frankie and I would like to welcome you to my blog.

In today’s guide I will show you how to block someone on Messenger in just a few simple steps. Don’t worry, it’s an easy process that you can perform from an app on iPhone, Android, PC or Mac without needing to be an expert in IT or a geek with your smartphone.

There are plenty of reasons why a person would want to block someone on Messenger:

If you feel, for one of the reasons listed above or for any other reason, that you want to block someone on Messenger right now, then you’d better read this guide.

I’ve split it in two parts: in the first part I’ll explain how to block someone on Messenger in a few steps (and of course how to unblock them), in the second part I’ll show you what happens when you block a user, i.e. what the effects of blocking are.

I’d say not to waste any more time and proceed.

How to block someone on Messenger without them knowing

The procedure for preventing someone from interacting with you on Messenger is different for each operating system or device you use.

How to block people on Facebook Messenger on iPhone (or iPad)

To block someone on Messenger with iOS (iPhone or iPad) the procedure is very simple: 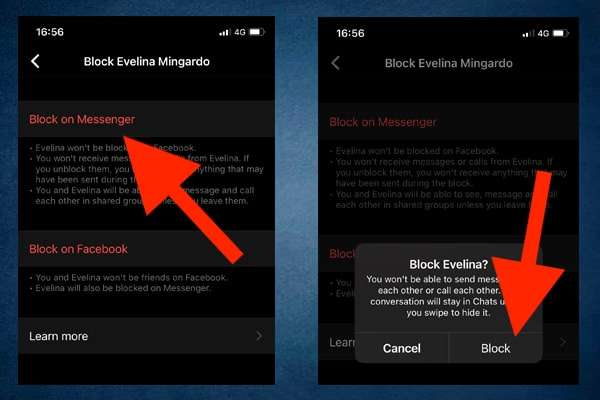 This is the quickest method to block a person on Messenger.

However, there is an alternative way that I strongly recommend you to use if you want to block multiple contacts at once.

On Android devices the steps to block an unwanted contact on Messenger are just as simple: 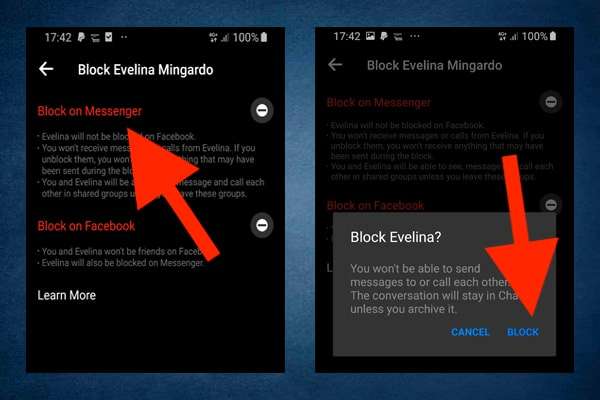 There is also an alternative way to block a contact for Android devices. Here it is:

How to stop someone messaging you on Messenger on Desktop App

You can also block someone from the computer app. There’s nothing simpler, here’s how:

How to block someone on Messenger from browser (PC or Mac)

Finally, if you are used to using Facebook Messenger from your PC or Mac, you can also block a user from contacting you in this way:

As you’ve seen blocking a user on Messenger is within everyone’s reach. You don’t need IT skills.

Please remember that blocking someone on Facebook Messenger doesn’t mean blocking them on Facebook. By enabling blocking on Messenger, you will prevent that contact from chatting with you or calling you, either via Messenger or Facebook chat. However, they will continue to see your posts, comments, likes, tags, profile or any other information you post. Obviously, depending on your privacy settings. If you want to prevent this from happening you have to block it not only on Messenger but also on Facebook. I link you to the official Facebook guide.

It’s time to show you how to unblock someone on Facebook Messenger.

Once again, the process is very simple and as far as the mobile app is concerned, it is the same for iPhone or iPad as for Android.

I’ll show it to you without wasting any more time:

The process of unlocking a contact from your Desktop app is as follows:

Remember, if you decide to unblock a person, you won’t receive anything that they might have sent you while they were blocked.

What happens when I block someone on Messenger?

Well, after I showed you how to block someone on Messenger, it’s time to explain what happens after the block.

If you block someone on Messenger, they can’t send you messages

When you block someone, that person will not be able to send you messages anymore, and the same applies to you. When you open the message thread, you will no longer find the text box, camera icon, GIF icon, etc. You will be greeted by the “Something is Wrong” notification.

Can a blocked person call you on Messenger?

No, blocking a contact on Messenger stops all interaction with them. Fortunately, unlike blocking a contact on WhatsApp where the call buttons are still displayed, Messenger hides the audio and video call buttons for both parties. Still, the blocked person can call you from other apps such as WhatsApp, Telegram etc.. I wrote a guide with the most used apps for making calls and video calls. Check it out so that you can block unwanted contact on all fronts.

Does blocking someone remove the conversation?

No. Blocking someone will not remove the conversation thread anywhere. In other words, old conversations will remain in Messenger and you will be able to read them until you manually delete the chat thread.

What happens to stories?

Can you interact with past messages?

If you open the thread of a blocked person’s conversation, you will notice that the reaction button is still visible. Tapping it will show you the reactions. However, tapping one of them will notify you that you need to unblock the person first.

What happens to groups?

Group chats remain unaltered if you block someone. You will both be able to see each other’s messages in common groups. However, Facebook lets you know when you enter a group in which there is a person you blocked on Messenger as a precautionary measure.

No. The other person will not be notified of any kind. However, they will lose the ability to send you messages or call you as we saw above and from this they will realize that they have been blocked.

Blocking someone on Facebook or Messenger is not the same thing. From the very beginning, when you press the block button on Messenger, you will be asked if you want to block only their messages or block them on Facebook as well.

The former will block the contact only on Messenger with everything you’ve seen so far about what blocking involves. This will have no effect on your Facebook profile. That is, you will still be able to view the contact’s profile on Facebook (you will remain friends) and interact with it (comments and likes). Only when you block them on Facebook, you will lose access to their profile and other interactions on Facebook including Messenger.

How to know if someone blocked you on facebook messenger?

I have been asked this question lots of times! I have good news for you. There are some ways to know if you have been blocked on Facebook Messenger. I have written a guide entirely focused on this topic. I suggest you to take a look at it, here’s its link: 7 tips to know if someone blocked your Messages on Facebook.

How to know if someone blocked you on facebook messenger?

Unfortunately you cannot block messages received from unknown people. However, I would like to show you a trick to prevent them from texting you several times: after you receive the first message from the person who is not your friend, just block them! This way they won’t be able to text you again. In the past (until 2019) it was possible to avoid receiving messages on Messenger from non-friend people. I honestly don’t understand why Facebook removed this option.

We’ve reached the end of this guide. I hope you found all the information you were looking for.

You should know that I’m very happy to help you.

Before we leave, I’d like to give you a quick recap of what I’ve explained, just to make sure you haven’t missed anything.

That’s really it for now.

If you have any doubts or questions comment on the post, I will be happy to help you by answering them as quickly as possible.

PS – Did you know that it’s possible to find out if someone blocked you on Messenger? Here’s how!